A watershed connects its people.

A watershed describes a landscape where all water flows to a central point and joins together, regardless of its beginnings, on its journey towards a common place.  A watershed is also a powerful symbol for the energetic connection that brings together people from a wide range of backgrounds and ideals towards a common purpose.  This connection to the water and by the water brings about a powerful sense of ownership and responsibility to care for the watershed which provides so  many services to us and unites us as a community.

A group of dedicated people began meeting in 2001 to discuss the need for a watershed council in the Chequamegon Bay area. We thought the water quality of our rivers was generally pretty good, but we didn’t really know. The rivers were known to be flashy – often flooding during spring run-off. Some rivers, like the Marengo and Bear Trap Creek, were known to carry heavy sediment loads. Lots of anecdotal evidence existed, but data on the quality of the rivers of the region were sorely lacking. The group decided that a citizen-based watershed organization would be a valuable addition to the area.  But how large of an area could a new organization tackle? The Chequamegon Bay area? Too many rivers and too large of an area for such a young, small group.  The Marengo River?  That was an option, but it flows directly into the Bad River and everything happening to the Marengo River affects the Bad.  So, how about the Bad River watershed?  The Bad River Band’s Natural Resource Department was already collecting water quality data on the Reservation.  We decided our new organization could complement the tribe’s program by collecting data in the same watershed, but off-reservation. That way, a large and important watershed on the shores of Lake Superior would begin to receive the attention it deserves. This was the Goldilocks solution – not too big (Chequamegon Bay), not too small (Marengo River), but just right!  We began by appointing an interim board of directors who chose a name, developed a mission statement, wrote by-laws, and finally elected our first real board of directors. The Bad River Watershed Association began officially in 2002.  We extend heartfelt thanks to the following people, who played crucial roles in the founding of the organization: 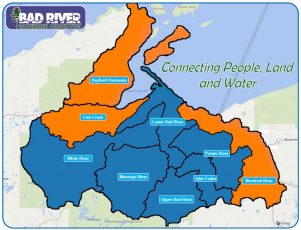 In 2015, the Bad River Watershed Association announced a new vision for expanding our reach. Lake Superior and the Chequamegon Bay region in particular are precious to many. People count on clean water and healthy natural resources for their employment, recreation and daily life. The rivers and streams that empty into the Bay and Lake have an impact on these waters and the resources within, like fish and wild rice. Expanding our reach around the Chequamegon Bay, out to Madeline Island and east to the state line allowed us to bring our skills and expertise to a greater area, which suffers much of the same lack of data that motivated citizens to start the BRWA. We added another 60% of land to the area we cover while increasing the number of people living within our working area by approximately five times. Citizens in this region have always been interested in protecting the water they depend on, and awareness is growing rapidly as new risks to the resource emerge. By bringing our organization to a wider audience, the Association engages citizens as a community and help develops the ties between individuals and the broader watershed system they depend on.

15 Years and a Name Change: The Superior Rivers Watershed Association

In the summer of 2017, the Bad River Watershed Association celebrated its 15th anniversary since it’s inception and celebrated a new milestone: the introduction of the Superior Rivers Watershed Association. We are proud of our new name, and feel it represents the work we do, our local communities and their stewardship of the rivers we all treasure, and Lake Superior, where those rivers ultimately lead.