Skip to content
Home
/
About Our Waters
/
Upper Bad River

Based on the Wisconsin Land Cover Data (WISCLAND) map from the Wisconsin DNR, the Upper Bad River sub-watershed consists of approximately 80% forest, 13% forested wetlands and 5% grasslands. There are several small communities and farm areas along Highway 13, which the river parallels.

Caroline Lake (pictured above) is a 129 acre drainage lake that serves as the headwaters for the Bad River. Caroline Lake is composed of open bog, shrub swamp, sedge meadow, emergent marsh and small pond habitat. These wetlands are important to many nesting and migratory waterfowl, mammals, invertebrates and fish. The land in this area has been purchased for conservation by The Nature Conservancy.

BRWA volunteers sample two sites on the Bad River above Copper Falls: at Gilman Park in Mellen, and near the Village of Morse. 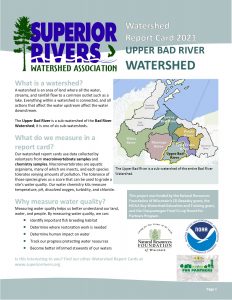